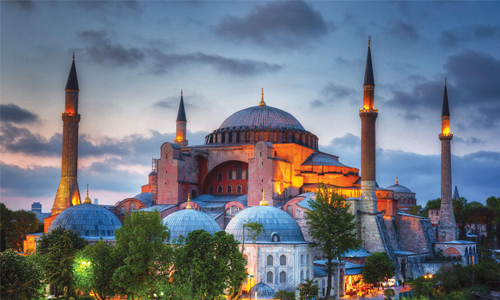 Hagia Sophia is referred to as the eighth wonder of the world and is considered one of the most important landmarks in Istanbul.

Hagia Sophia was an Eastern Orthodox cathedral before it was converted into a mosque by Mehmed the Conqueror and then turned into a religious museum in 1953 and is one of the most prominent examples of Byzantine architecture and Ottoman decoration.

The construction of the church began in 532 AD by Emperor Justinian, and it took about five years to build. About 11,000 men were involved in building the church, and the church was officially developed in 537 AD.
The Hagia Sophia Museum is one of the most important architectural masterpieces in the history of the Middle East. It was used as a cathedral for 916 years and then as a mosque for 481 years, and since 1935 AD it became known as the Hagia Sophia Museum.

After the second fire that killed the Hagia Sophia , Emperor Austinianus II decided to build a bigger and greater building for Hagia Sophia, so he commissioned the most famous architect of the era at that time to build it, and the edifice standing today is the edifice that was built on the third time and its construction period has been long since 532 to 537 m.

The church continued to be used as a center for the Christian religion for a long time until the introduction of the Islamic religion in 1453 AD to Constantinople, and there was no mosque for Muslims in the city to perform the Friday prayers that followed their conquest of the city, so time did not help them to build a mosque in this short period of time, so the Sultan ordered the conversion of Hagia Sophia to a mosque, and then after that he bought it with money, and he also ordered the mosaic drawings that were inside it to be covered and he did not order to remove them, in order to preserve the feelings of the Christians, and the drawings are still inside them until now.

The dome of Hagia Sophia is about 55 meters high and about 31 meters wide and was considered a revolution in the history of architecture. Today, the dome is surrounded by four minarets built during the Ottoman period.
The oldest mosaics date back to the 9th century AD, when most of the Christian mosaics are located in the upper part of the temple, which was previously a women's section during both the Byzantine and Ottoman eras.

What should not be missed during your visit to Hagia Sophia?
The connection of meeting the Christian and Islamic religions through the displayed symbols, such as the main mihrab that points to the direction of Makkah Al-Mukarramah, overlooked by an ornate mosaic representing the Virgin Mary and the Child Jesus.

The bronze-covered Wish Column located in the northwest of the building is believed to have the power to heal and fulfill wishes and is said to heal the sick because of the grace of St. Gregory.

There is a small opening in the column that widens the palm of the hand inside it, which is one of the most important factors of tourism in Istanbul, and inside that area is another smaller size for placing the thumb, and the person who wants to achieve his wish rolls his finger completely without lifting it from his place until his wish is achieved, and here lies the difficulty of focusing I have to wish and at the same time wrap a finger that way, but the place is always crowded with those who want to try it.

The Hagia Sophia cat, where a distinguished cat lives in the "Hagia Sophia" museum in Istanbul, called "Galli". Foreign and Turkish visitors to the museum publish photos of this cat on social media, so that former US President Barack Obama took a picture with it during his visit to the museum, and it is interesting that the cat has a special page on the Tumblr site for photos and has a large fan base inside and outside Turkey.

How to get to Hagia Sophia:

The entrance ticket costs about 72 Turkish liras, equivalent to about 13 US dollars.

Why is Hagia Sophia a museum?

For eight decades, Istanbul's iconic Hagia Sophia has remained a symbol of Turkey's commitment to a secular society. In the 1930s, the founder of modern Turkey, Kemal Ataturk, converted it into a museum in his quest to create a secular republic on the ruins of the Ottoman Empire.Is the Blue Mosque the same as Hagia Sophia?
It is called the Blue Mosque because of the blue tiles on the walls. Aya
Sophia is a treasure trove of the Byzantine and Ottoman Empires. It was once a church, later a mosque

Why is the Hagia Sophia so important?

Hagia Sophia is one of the most important Byzantine structures ever built. It bears historical significance as a culminating feature of the Roman Christian era and stands as a monument of artistic and architectural achievement.

What does Hagia Sophia symbolize?

Hagia Sophia is a symbol of harmony, peace and tolerance in Turkey. It is an important symbol of Istanbul as it is the meeting point for  world's religions. The walls of Hagia Sophia represent a mixture of Islamic art and Christianity symbols. Sophia used to be a church and a mosque, today it is a museum turned into mosque

What is special about Aya-Sophia?

Hagia Sophia, whose name means "holy wisdom", is a domed monument that was originally built as a cathedral in Constantinople (now Istanbul, Turkey) in the sixth century AD. It has two floors centered in a huge nave that contains a large dome roof, side by side. Side with smaller domes, towering above.