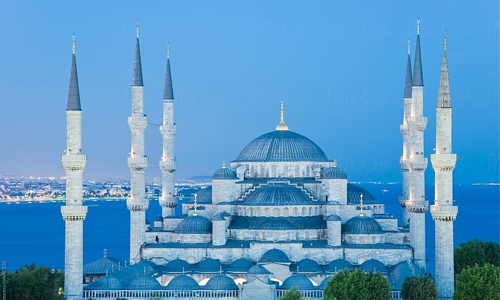 Sultan Ahmed Mosque, also known as the Blue Mosque, is one of the most famous and important mosques in Istanbul, Turkey. The mosque is located in Sultanahmet Square opposite the Hagia Sophia Museum.
The mosque is famous for its distinctive architecture and is one of the most important and largest mosques in the world, and was built by Sultan Ahmed I.

The mosque was built between 1609 and 1616, according to an inscription on one of its doors.

The mosque is located to the east of the ancient Byzantine racecourse and to the south of the Aya Sophia Museum, it has a high wall surrounding the mosque on three sides, with five gates punctuating the wall.

The Blue Mosque is named so because its interior walls are decorated with ornate blue Iznik tiles.

The most important characteristic of the mosque is the presence of the fingerprints of architectural, Byzantine and Omani art, as well as its location, as it overlooks the Marmara Sea and is opposite the Aya Sophia Museum.

The mosque contains many windows, numbering more than 200, and enjoys a large courtyard with a height of up to 43 meters.

We can see some Christian Byzantine architectural elements inspired by the Aya Sophia Museum opposite in addition to traditional Islamic architecture, which is considered the last great mosques in the period of classical Ottoman architecture.

The mosque is designed from the inside in the form of a longitudinal rectangle with a length of 64 meters and 72 meters, and in the center there is a large dome on its edges with four semi-domes, and each corner of the mosque is covered with small domes containing many windows that allow the passage of light.

The mosque includes about 20 thousand blue tiles and is one of the designs that were famous for the sixteenth century with designs in the form of distinctive flowers and trees, and it was also covered with blue marble, which led to it being given the name for which it is famous.

In the past, the mosque contained a hospital, a school, a restaurant for the needy, a market, and it also housed the tomb of Sultan Ahmed, his wife and his sons, but they were all destroyed in the nineteenth century.

The six minarets that the mosque is famous for were built by mistake, as the engineer misunderstood the sultan’s request, which asked him to use gold while building the minarets, so the engineer understood that he wanted to build six minarets because of the similarity of the words gold and six in the Turkish language.

The mosque had about 260 windows containing colored glass from the seventeenth century, but they were destroyed and replaced by low-value glass.

Visiting times: from nine in the morning until six in the evening
Entrance Tariff: There is no entry fee

What makes the Blue Mosque a world famous monument?

The Blue Mosque is one of the last great mosques of the classical period of the Ottoman Empire, built in 1609. It was built with six minarets instead of four which caused a sensation. Today the Blue Mosque is a famous tourist attraction in Istanbul and one of the most important ones.

Are there any hotels close to the Blue Mosque?

Because it is located in the most popular tourist area, there are a number of accommodation options near all budgets. Some of the luxury hotels include the Four Seasons Sultanahmet and the Armada Sultanahmet.

How can I reach the Blue Mosque?

The easiest way to get there is to take a tram to Sultanahmet, which is a 2-minute walk away. Be careful, at busy times there is often a queue to enter. From the Blue Mosque to the AyaSophia, it is only a two-minute walk away.

Is there an entrance fee for the Blue Mosque?

The Blue Mosque is a place of worship so be calm and respectful. You should take off your shoes and put them in a transparent plastic bag (provided free of charge)... Entrance to the Blue Mosque is free (although there are more than five million visitors annually!) So making a small donation is welcome.