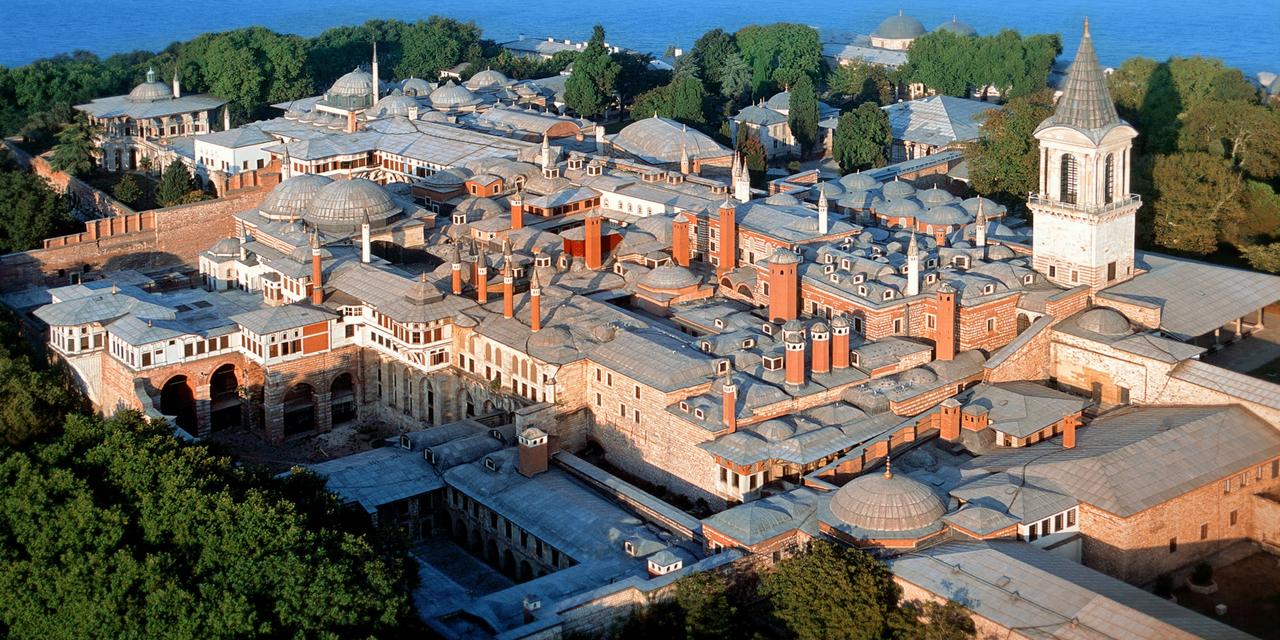 Topkapi Palace is considered the largest of the palaces in Istanbul, as it was considered a center for the sultans of the Ottoman Empire over a period of four hundred years from 1456 until 1856 CE.

The building of the palace was not distinguished by the high degree of extravagance and luxury that characterized the palaces in that period of time, but today it is a magnet for a large number of tourists after it was used for state events in the past.

The palace was classified by UNESCO among the monuments belonging to the historical regions in Istanbul, and then it was included among the World Heritage sites and described as one of the best living examples of the cultural diversity in the Ottoman Empire.

About 4000 people lived in the palace, and it contained four main courtyards and a number of buildings such as dwellings and kitchens, as well as mosques and a hospital.

Sultan Mehmed Khan II, the Conqueror of Constantinople, ordered to start building the palace in 1459 AD under the name Yeni Saray, meaning the new palace, in order to distinguish it from his previous place of residence, and the palace took its new name, Topkapi, which means the high door in the nineteenth century. It was expanded several times and renewed. After an earthquake in 1509 AD and a fire in 1665 AD.

The Topkapi Palace was divided into a group of buildings independent of each other, as it includes residences, reception halls, bathrooms, libraries, stores, kitchens, churches, halls for clothes, halls of sultans' drawings, manuscripts and other possessions.

Palace design from the inside:

In the past, the palace contained about thirteen doors, but now there is little left of them, and inside there is a section called the Haramlek, and the section contained nearly 400 rooms, and there were about 300 of its favorites and more.

This door was created in 1487 AD during the reign of Sultan Mehmed the Conqueror, and it is considered the main door of the palace. It was restored several times while preserving the same old splendor. The door was opened from dawn and closed at the evening prayer.

Hall of the Holy Secretariats in the Palace:

The hall of the sacred trusts was established by order of Sultan Mehmed the Conqueror, and these trusts were collected after the conquest of Egypt by Sultan Selim, and in this hall many valuable treasures, it has a box made of gold engraved with Qur’anic verses and wonderful decorations that contain a smaller box containing the Prophet’s flower - may God bless him And blessings - there is also a box made of gold engraved with Qur’an verses and wonderful decorations, and the noble prophetic flag is inside a box of gold, and the sacred trusts also included a number of swords of the Rightly Guided Caliphs and Companions, in the forefront of which are two swords of the Messenger of God.

The presence of this fountain is distinctive for the palace, as it is impressive and eye-catching at first glance. It was built in 1728 AD outside the palace gate during the reign of Sultan Ahmed III.

The palace is located in the Sarayburnu area, in a high place and at the highest point close to the sea, on a place overlooking the Golden Horn and the Sea of ​​Marmara, and the palace overlooks from several points the Bosphorus.

How to reach Topkapi Palace?

You can go to Topkapi Museum by using the Kabatas Bagcilar tram line, which is the fastest way. Get off at Sultanahmet Station.

How much is an entrance ticket?